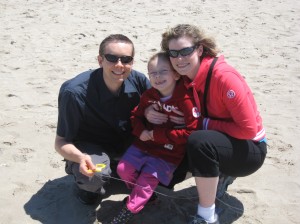 As we drove up I-5 yesterday and observed the stunning fireworks by everyone who set them off near the freeway, I was thinking about this day eight years ago when I said to David at our rehearsal dinner, “hey – happy independence day,”and he laughed, saying, “yup, its my last one.” You’ll have to ask him if he thinks that marriage has made him sacrifice too much of his independence, as he joked about back then, but as I remembered this, I couldn’t help wondering if yesterday was my last independence day too, in a way, since today I start taking Sprycel, and if it does its job, the side effects – at least at first – will be much more severe than I have had in about a year.

My second thought, of course, was yikes, I don’t have an anniversary present for my funny, smart, and extremely devoted husband – until he confessed the same – and we agreed that for our anniversary, I would give us both a gift by taking the new drugs prescribed for me. He’s at work now, though, and I don’t like doing something new alone, so I thought, hey I’ll write about it and you guys can take it “with” me, ok? So, hang on a second, let me get my weird little white pills, and we’ll be on our way.

Okay, done. Swallowed and doused with a glass of water. Welcome to July 5th, and hopefully, my new life.

A quick disclaimer to those of my friends who don’t consider themselves religious – I’m at a place where I can’t help but talk about faith since its what’s holding me together – but I hope that if this kind of thing is not for you, you”ll be patient with me and feel comfortable skipping those parts.

The song of the week for me was one my friend Lisa told me about months ago after their trip to London, where most of the churches sang it – Matt Redman’s, “You Alone Can Rescue,” which I heard after buying the Passion “Awakening” CD (yes, I’m a passion band fan, a Chris Tomlin fan, and a Watermark fan, and I don’t think its a coincidence that you can hear all the same people sing on all of those recordings, because deep down I just wish I could sing like Christy Nockels… but that’s a whole other issue!). I bought the CD because my other friend Melanie sent me a link to it when I first heard I wasn’t doing as well as expected back in March. And I must admit – I didn’t like it right away. This song I’m mentioning I particularly didn’t “get”immediately. But as I put it on while painting last weekend, I broke down in tears as they got to the tag part of the song that says,

We lift up our eyes to the Giver of Life

I know it sounds bizarre to say that, but as I told David’s Grandpa yesterday as we stopped in to see him, a few weeks ago David commented to me that since I’ve gotten cancer, everything else in our life has improved for the better, except the fact that I’m sick. Our marriage, our relationship with our kids, our relationship with our families, our relationships with friends… only to name a few things. When we can push through the fear to the heart of things, we actually feel way more peace than we did 18 months ago, a peace that really is more secure than we felt before. Because, as I told Grandpa, yes, this is messing me up quite a bit, but if I am really honest with myself, its kind of fixing me too. It pushes me to go to places, as a person, as a wife, and mother, that I would never have gone before, but that are so much more satisfying… beautiful… secure. Our priorities are different. There is, in many ways, so much more life surrounding us since I’ve had the threat of death.

Why, I don’t really understand, except that I think perhaps we limit God’s healing to the physical experience here on earth. When my dad was dying, so many people around him told him they were sure he was going to be healed, and on the day he died, I realized that though they were so discouraged that they seemed to be wrong, in fact, they were right. The changes in my dad near the end were amazing, powerful, and I really sensed he was going home to a place where he’d never be sick again. He did get his healing, we just didn’t get to be there when he was well. Healing is so much more than just physically being without illness. So,

We lift up our eyes to the Giver of Life – No matter what.

Take this past weekend, for example, or what I’d like to call what will hopefully be the 1st Annual Meredith Family 4th of July Weekend at the Beach (somebody, please, come up with a better title than that!). Traveling down on June 30th, Elliana’s cough became worse and worse to the point when we arrived in Portland, she could barely breathe. We were up with her through most of the night, sitting in the shower till her lungs calmed down, then down for an hour, then back up. That morning we bit the bullet and took her to a local pediatrician, who of course told me what I had figured out by 5 am- its croup. We drove to the beach expecting a sleepless and stressful weekend. What we did not expect was one of the best family weekends we’ve ever had. We spent hours playing games (okay, I was knitting at the table while they played, because – yes, family, its been announced, this Christmas is sweater Christmas, so I’m on a deadline!), laughing at funny movies, going to the outlet mall, and having adventures and misadventures flying kites and making sandcastles on the beach. Just to breathe the ocean air is incredible. It reminds me that the world is so huge – the universe even bigger, and I am like this tiny piece of sand on the beach.

Yes, Elliana screamed for an hour on Friday night, thanks to the prednisone pills the doctor prescribed – they can make you extremely irritable – and yes, David and I didn’t sleep as much, and yes, I ended up coming back with a nasty sore throat, no doubt courtesy of my sweet two year old coughing all over me, but I can say it was all worth it. The night we stayed up till nearly 1 am (and these are people who like to be up by 5:30 or 6:00!) to play German Bridge is one of my favorite Meredith memories to date. A 2 1/2 hour talk on the beach with my new sister-in-law allowed me to know her a lot better. Shopping for Noelle’s uniforms only reminded me that life is fast – I have a kindergartener now! And the hours of walking my cranky baby bonded me more strongly to her and my role as mommy. Pictures will be on Facebook, if it cooperates with me.

So, thirty minutes into Sprycel treatment (yes, it takes a long time to post when you have lost of cries of ‘momma, momma’), and I feel okay, I guess. I have opened a can of ginger ale, maybe only in anticipation of what happened the last time I tried a new chemo drug. One thing I am asking people to specifically pray about is that my immune system stays strong – no neutropenia (really low neutrophils) – so I can keep taking care of my kids even when they’re sick. Gleevec has been good to me that way, so let’s pray Sprycel does its job, but still keeps my white blood counts normal, not high, or low. This weekend proved that other than some time with Grandpa Mike, Elliana doesn’t take anyone else when she’s sick!

So here we go… welcome to July 5th.