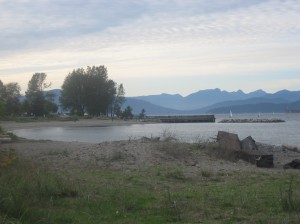 I wish I had news for you all. I don’t. I have no idea how things are going except that my blood work is “good.” We won’t know for a few months if Sprycel is doing any more than Gleevec did. And the waiting, oh the waiting. It’s hard. I’ve often wished for patience, but I tend not to have the strength to wade through the things that will make me patient.

David and I are in the middle of a Fringe-a-thon, thanks to our growing addiction to all things written or created by J.J. Abrams (yes, this guy actually made me enjoy a Star Trek movie). And last night, I don’t really remember what the episode was about but I do remember Olivia saying to Peter, “haven’t you ever lived with something unresolved and wished there was something you could do about it?” And he rolls his eyes and says, “congratulations, you’ve just described the entire planet.”

I began to think about how much we tend to hate tension. I’m not a big fan of it myself. I like things tied up in nice, neat packages. I wish that all the things that have been left hanging in my life would just work themselves out. I don’t know if that’s me, or everyone, but in any case, somebody out there who’s in charge of it all, has a sense of humor, because the last five or ten years have brought so many things that are still not yet resolved. Relationships, situations, losses, life changes… so many things that have left me asking, seriously, how did I get here?

Lately I’ve been reading about gene therapy, which holds such amazing possibilities. Imagine if we could just test everyone who has genetic predisposition to disease of any kind and then replace those faulty genes with healthy ones? The Human Genome Project was launched in 1990 with just this eventual goal, that one day perhaps gene therapy would replace pharmacology, that we would eventually not just treat the symptoms of disease but eradicate it at its very source.

But the reality is, it hasn’t worked, mostly because we can’t find a way to inject the healthy genes without giving new disease to the people we “treat.” In fact, one of the consent forms for a lot of these experimental trials states clearly that anyone who goes under this process will be at much higher risk for cancer in the future, since their DNA will be altered. And some people have even died as a result of the treatment. So here we have this idea, even the technology, to theoretically eliminate the source of so much pain for the world, and yet, its been failing for the last 20 years. Why?

I don’t know exactly, and the Human Genome Project has done a lot of good, in fact, I have this project to thank for some of the research behind Gleevec and its second generation drug, Sprycel, which has prolonged my life and has the potential to even cure it. But so far, I’m not cured. And so many of my faith-based friends have asked me, why do you think God lets you live with cancer? I really don’t know, but I know that it keeps me in that tension that I hate so much. It keeps me wondering what’s coming next and when it will be over, and if I’ll ever be “normal” again.

Then, last night, it occurred to me that perhaps I AM normal. Maybe this tension IS normal. We don’t like it, and we’re constantly looking for ways to fix it, but as soon as we do, instead of getting the smooth sailing we expect, most often something else follows that is even harder. And sometimes, what follows is a direct result of the resolution of the previous problem.

Even if gene therapy was one day truly and universally successful, I wouldn’t be surprised if this success simply brought a host of new problems. They’ve already had to pass a law in the United States in the past few years to protect people who’ve had genetic testing done from discrimination in regards to employment and health insurance. Who knows what else might be used against us if we knew every thing about ourselves and everything that might eventually happen to us? What would happen to people in a world that not only hoped for the absence of bad things, but actually expected it? Can we live with the expectation of perfection? Of only good, nothing bad? We just might destroy ourselves or each other with this kind of power. We might bring a lot of good, too, but I’ve noticed that everything good in my life has also brought its own challenges. Take children, for example. Such a blessing, but such a challenge.

And what’s more, if we could do all this, if we could fix all suffering, would it make us happy? Or would we find new ways to be unhappy?

There’s so many things in this life that will never be fully resolved. Perhaps its part of maturing as a human to learn to embrace those things. Some pain is just a part of who we are. We learn to put aside what we are not to keep, and to somehow internally, or personally, resolve the unresolved in our lives. My old college roommate, in her valedictory speech, said something so simple, that we were to embrace the journey that was before us. I think she had something there. I’m being challenged not just to look for the end, to hang on for when it will all be over, but somehow to be okay in the middle of things being NOT okay.

After all, these colorful parts of our lives, the memories of things not yet fully resolved, the things we have hanging in the balance, the imperfections, that’s what makes each of us interesting. Beautiful. Unique.

So, I’m still waiting. But its okay.